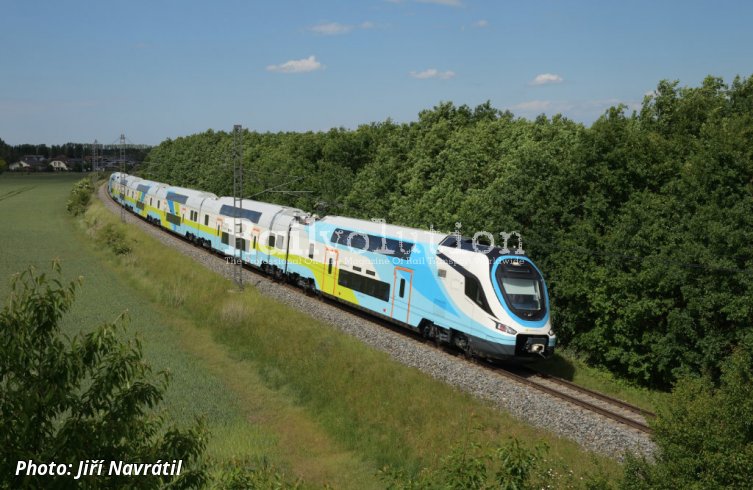 Upon arrival at the VUZ Velim test centre, the six-car DEMU2 double-deck EMU for WESTBahn started test runs there. The operator ordered four units from CRRC ZELC in December 2019. However, unlike Leo Express, which in 2016 ordered three single-deck Sirius EMUs there, this was done while simultaneously ordering 15 new six-car KISSes from Stadler as part of a "cascade" for financial reasons, in which the original 17 KISSes (nine six-car and eight four-car ones) were gradually sold to DB and replaced again with the same type, so that even with possible delays in deliveries from CRRC, WESTbahn still has enough operational vehicles.

The first DEMU2 was shown on 31 May 2021 and WESTbahn is to lease these EMUs from the time of approval, which the manufacturer estimates to be summer or autumn 2023. However, it is impossible to ascertain how the approval process is progressing. The CRRC has long been completely unresponsive to inquiries, and WESTbahn refers us to the CRRC...

While last autumn we were told by the operator that "the train is currently in Minden, where some testing is taking place, but as we are not coordinating it, we can't give you any more details," this May the response to our query about the testing and the estimate of meeting the regular service start date was even more terse: "Unfortunately, we cannot provide any information on the approval and commencement of CRRC trains."

These wordings are reminiscent of communications with Leo Express at the start of the Sirius contract, when no further details were provided and when even our rudimentary query about the number of cars in the trains was met with the statement that "we are bound by confidentiality at this time for any information regarding car numbers, pricing, maintenance etc". Which is a rather unusual justification from the customer, as usually train manufacturers refuse to disclose information, citing the confidentiality obligation imposed by the customer...

Inevitably, then, the question arises as to what leads CRRC's customers to adopt this attitude. It is difficult to succumb to the impression that the operators are not interested in their new vehicles, that they do not follow their development and design stage by stage, that their technicians are not involved in at least some of the important phases of production and subsequent testing, and that managers are not interested in the approval process and whether trains ordered at great expense, which will have to be repaid from operations, will be available for their business (and livelihood) in the timeframes they have incorporated into their business plans after long deliberations.

Indeed, one is reluctant to believe in such blind trust in the manufacturer's abilities, despite the fact that operators today give manufacturers considerable competence in providing train maintenance. As can be seen, however, the responses from LE and WESTbahn are very similar, and after all this corresponds with the level of communication with other CRRC customers, not only in Europe but also on other continents - getting any official information on, say, Chinese passenger cars for USA operators or CRRC locomotives for Transnet in South Africa is simply impossible.

There is a rational explanation for this irrational behaviour, although not a positive one, which is that this manufacturer, as part of the political customs in Communist China, imposes (also) various restrictions on operators from the democratic world, and moreover its behaviour changes during the course of the contract: the initial CRRC promises start to wane, until gradually the situation reverses and the customer has less and less chance to interfere with his project, and even then is not informed about such "small things" as the approval procedure, etc.

This may correspond to the Chinese railways' practices, but it is therefore diametrically opposed to the European ones (although it may correspond to the simplistic ideas of some managers that buying a train should be the same as buying a car, i. e. coming to the shop and leaving in the chosen car a short while later).

Last but not least, it must always be remembered that these contracts represent one of the many ways of China's economic and political expansion, so they are not only encouraged but also monitored by the Communist party. This is also why more caution would sometimes be in order when deciding to start doing business with China... (as the not unlike Russian regime has more than amply convinced us of recently).