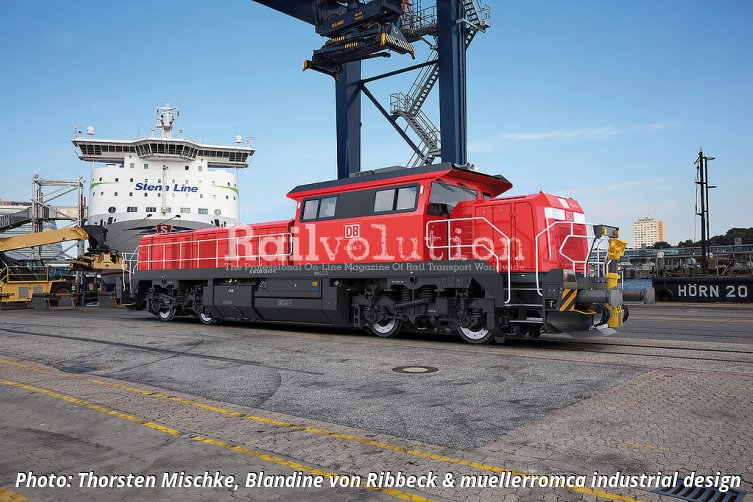 On 18 January 2022 it was also announced that DB Cargo and Vossloh Locomotives signed at the end of 2021 an order for 50 Type DM 20-BDD hybrid locomotives. Their delivery is scheduled to start in 2024. Moreover, the framework agreement, which is result of the DB Cargo’s international tender, includes an option for 200 more locomotives.

Vossloh Locomotives offered the operator its new DM 20-BDD (Battery, Diesel, Diesel) version, which incorporates two diesel gensets and a traction battery as an energy storage. While the output of both latest-generation diesel engines is more than 900 kW (2 x 480 kW) and optimised control of the second engine at the optimum operating point enables significantly reduced fuel consumption and CO2 emissions, the battery capacity is over 120 kWh. The energy storage system with lithium titanate cells can be charged both externally (plug-in) and while runing by using the braking energy.

The 120 km/h locomotives will be fitted with the on-board ETCS Level 2 from Siemens Mobility as signed in September 2021. Regarding the supplier of the diesel engines, Vossloh Locomotives stated that "It is to early to give further information at this stage. As soon as we have any news, we will give you an update."

This centre-cab locomotive will be ideally suited to the range of tasks at DB Cargo, both in shunting and main line operations. Thanks to the fully redundant drive chain, the operator can later convert the locomotives for catenary operation with energy storage in order to avoid the use of diesel engines. Moreover, DB Cargo can even retroactively integrate energy storage and energy generation technologies that will be available in the future.

For Vossloh Locomotives (part of CRRC) this represents a second order for its DM 20 locomotive, following a June 2021 contract of Paribus for up to 50 Type DM 20-EBB (Dual-Mode) locomotives.

The German federal government is supporting DB Cargo in the introduction of this innovative technology with a total of 15 million EUR. The operator’s fleet is becoming even more modern and efficient: step by step, all existing elderly diesel locomotives are being replaced by modern, climate-friendly machines with alternative drives. Currently, 300 new shunting and dual-power locomotives are in the pipeline for DB Cargo. In the long term, the aim is to replace around 900 older diesel locomotives.

The third pillar of the new strategy is the procurement of Toshiba’s Type HDB 800 hybrid shunting locomotives. A total of 100 of them, to be built in Rostock, are to be used by DB Cargo. The first rollout is planned for 2024.

Sigrid Nikutta, DB Cargo managing director, said: “We are investing in our locomotive fleet because we are going to grow. With state-of-the-art technology, we are helping to achieve the climate targets in transport. Our modernisation programme can save around 14 million litres of diesel annually.”