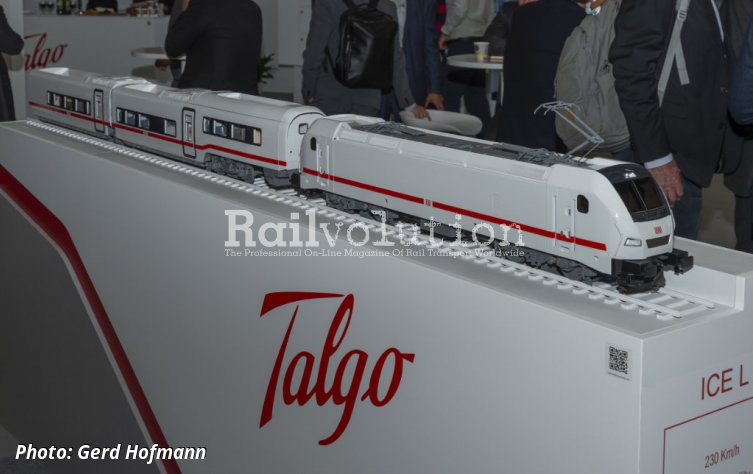 A model of the TRAVCA electric locomotive, which will haul the Type Talgo 230 non-powered units (NMUs) at DB Fernverkehr, was on display at the Talgo stand. So far 23 sets have been ordered from the framework contract for up to 100 trains signed in February 2019, which were named ICE L at the end of last year instead of the previous working name ECx. The original contract term called for the first Talgo trains to start operating in December 2023.

The multiple-voltage TRAVCA locomotives, which are to haul the ICE L trains on the entire international Berlin - Hannover - Bad Bentheim - Amsterdam route, will also be equipped with traction equipment for 1.5 kV DC, replacing the existing locomotive changes on the border and saving about 15 minutes of the existing travel time of these services. The introduction of ICE L trains here is currently planned for October 2024, but the TRAVCA locomotives are expected to be deployed even later due to delays in deliveries - estimated to be at the end of 2025 at the earliest. Therefore, the use of Vectrons is envisaged to bridge this time.

In addition, the ICE L „high speed trains“ are planned for the touristically important domestic routes Westerland (Sylt) -  Köln, Westerland - Frankfurt/M - Karslruhe, Westerland - Berlin and  Köln - Oberstdorf (in the foothills of the Alps) from 2026.

In the photo of the ICE L model, the large dead space between the TRAVCA locomotive and the end car catches the eye, which, with the „redundant“ locomotive driver's cab, not only takes away passenger space (while various ways are being sought, how to literally cram more seats into the trains), but which will also cause unnecessary aerodynamic and therefore energy losses, one of the many other disadvantages of the NMU concept, especially for a train that is supposed to travel at speeds of up to 230 km/h...