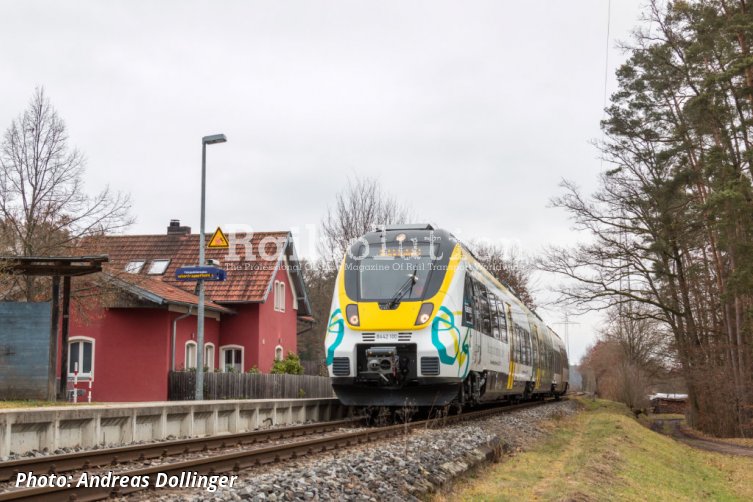 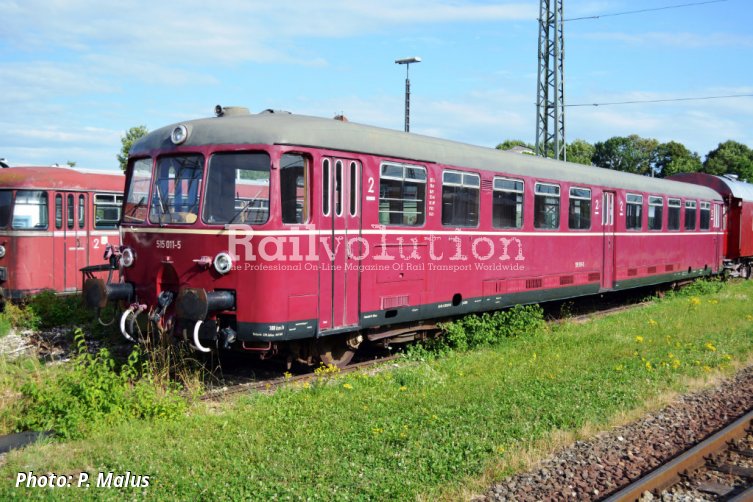 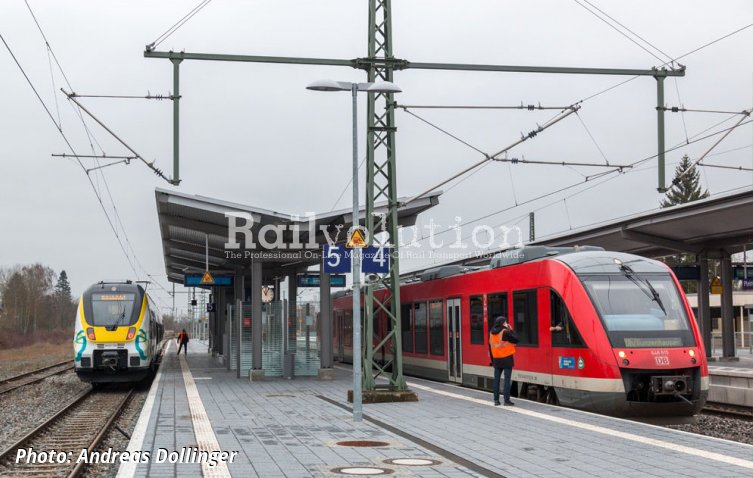 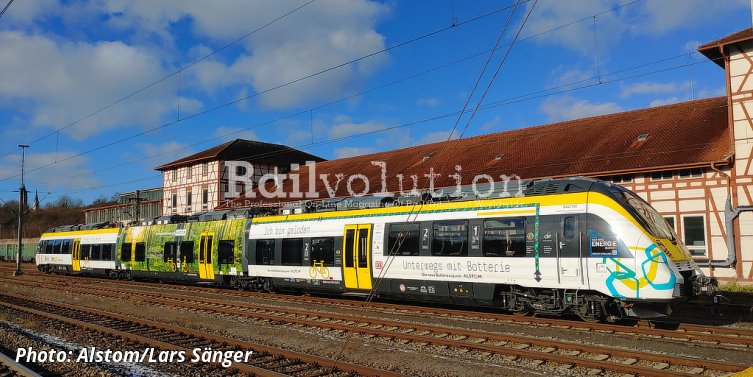 Gunzenhausen, Saturday morning, 29 January 2022. The train arrived quietly at the platform and some passengers looked at it with suspicion - no usual roar of the diesel engine, just the subtle hum of the electric drive... Then, using the power from its batteries, Talent 8442 100 set off on its journey on the non-electrified line to Pleinfeld.

This is how we can describe the moment when, for the first time in some 35 years, an electric train again took to the non-electrified Seenlandbahn, namely in the form of the Talent 3 BEMU (Battery Electric Multiple Unit), which was first presented in September 2018. This also fulfilled the Bavarian government's promise from the same year to pilot a battery train as part of the implementation of the region's electromobility strategy.

The Seenlandbahn is a railway line in Bavaria between Gunzenhausen and Pleinfeld. It is 17 km long and passenger traffic there is organised under the Verkehrsverbund Grossraum Nürnberg (VGN). It is located in the Fränkisches Seenland and connects two electrified main lines, one from Treuchtlingen (about 100 km north-west of  München) to Nürnberg to the north-east (on which Pleinfeld is situated) and the other from Treuchtlingen to Würzburg to the north-west (on which Gunzenhausen is situated).

On the other hand, on the 40-kilometre stretch between Gunzenhausen and Nördlingen (about 120 km northwest of München), which is named Hesselbergbahn, only freight and museum traffic operates under the name Seenland-Express, which is related to the aforementioned Fränkisches Seenland, an area of artificial lakes in Mittelfranken (Middle Franconia), less than 50 km south-west of Nürnberg.

Battery train technology is not new in principle. Battery trains were already running in Germany in large numbers a century ago and the then Deutsche Bundesbahn also had hundreds of battery trains in its fleet. The best known of these is the Class ETA 150 (Elektrischer Triebwagen mit Akkumulatorenbatterien, electricaly powered car with batteries), of which DB acquired a total of 232 cars between 1954 and 1965; in 1968 it was redesignated to the Class 515.

Bayeyrn in particular, where is now (also) tested the Talent BEMU, was once the bastion of the Class ETA 150 (515) cars. The last of these were in service until June 1985 in Swabia and the Nördlinger Ries (the Ries Crater, also known as Ries for short, on the border between Bayern and Baden-Württemberg, which was formed by an asteroid impact some 14.5 million years ago and which is about 24 km in diameter and up to 200 m deep).

The trains, one of the nicknames of which was „Steckdosen-Intercity“ („socket intercity“), were very popular with passengers and railwaymen alike. The battery capacity was gradually increased during the Class ETA 150 production, from an initial 352 kWh to 564 kWh. In addition, the latest type of battery was always installed at each battery change (approximately every four years); from 1965 onwards, batteries with a capacity of 603 kWh were used. The working range of the cars of up to 500 km guaranteed more flexible operation and longer diagrams than today's battery models.

However, these cars cannot be directly compared to today's vehicles by principle, as the BEMUs are capable of running on both batteries and overhead line power, whereas ETA cars at that time did not offer the possibility of storing braking energy in batteries or running directly on overhead line power while charging the batteries. Charging therefore had to be done only when the train was stationary, took several hours and was therefore mostly done at night.

Due to the high operating costs, Deutsche Bahn (newly formed by the merger of Deutsche Bundesbahn and Deutsche Reichsbahn on 1 January 1994) stopped operating the last Class 515 cars in 1995 in favour of a cheaper diesel-powered trains. One of the few surviving examples of the Class ETA 150s can be found in BEM (Bayerisches Eisenbahnmuseum) in Nördlingen. Unfortunately, however, it does not have traction batteries and therefore cannot run under its own power.

A Bit Of Modern Battery History

With the advent of the climate protection debate, battery technology is enjoying a renaissance (not only) on the railways. Manufacturers and universities are working on the development of such hybrid trains across Europe, with government subsidies being used extensively. The BMDV (Bundesministerium für Digitales und Verkehr, Federal Ministry for Digital Affairs and Transport) alone has invested around 4.2 million EUR in the Talent 3 BEMU project.

In this case, it is the three-car unit 8442 100, which was first presented by the then Bombardier Transportation (BT) in September 2018 at the Hennigsdorf works and whose development was launched in 2016, together with TU Berlin (Technische Universität), with the support of the NOW (Nationale Organisation Wasserstoff- und Brennstoffzellentechnologie, National Organisation for Hydrogen and Fuel Cell Technology) and a grant from the Federal Ministry of Transport.

This prototype Talent 3 BEMU is equipped with four lithium-ion traction batteries, which are mounted on the roof of the intermediate car. The pantograph is located at the inner end of one of the end cars. Charging of the traction batteries is possible from the catenary (while the train is running or is stationary), from the external grid via a socket on the vehicle and also by electricity from the electrodynamic brake.

In 2018, BT claimed that the unit is capable of travelling up to 40 km in BEMU mode without recharging. By 2019, the manufacturer wanted to create a new generation of Talent 3 BEMUs with a working range of up to 100km. So now Alstom says the unit has a battery range of about 150 km under good conditions.

At the first presentation in Hennigsdorf, it was announced that in 2019 DB would start a 12-month test passenger service with 8442 100 in the Alb-Bodensee region (around Ulm) in Baden-Württemberg. This did not happen until much later...

In the meantime, Bombardier sold its Transportation division to the French Alstom in 2020, a deal which was concluded on 29 January 2021. However, since Alstom had to sell the Talent family of Hennigsdorf (and also the Coradia Polyvalent family of Reichshoffen, both of which are now owned by CAF from November 2021, together with the French Reichshoffen works) when it acquired BT, Alstom will offer battery trains for Germany and related markets based on the Coradia Continental family, for which it has already received initial orders.

However, the prototype of the Talent 3 BEMU was not included in the sale to CAF and so became Alstom's test vehicle. During the tests, it appeared at several locations in Germany - it made several appearances at Treuchtlingen and, in early September 2021, at Chemnitz, in connection with a presentation to the VMS (Verkehrsverbund Mittelsachsen), which ordered 11 three-car Coradia Continental BEMUs for the Leipzig - Chemnitz line in February 2020.

The Talent 8442 100 was authorised on 22 December 2021, becoming Alstom's first fully approved battery train. On 24 January 2022, it then began test operations with passengers in regional transport in Baden-Württemberg and on 29 January in Bavaria (in this case, an additional ceremony was held on 5 February in the presence of government officials and with some 600 people in attendance).

On weekdays, this Talent 3 runs on the electrified line from Stuttgart south-west to Horb am Neckar (approx. 50 km), where the aim is mainly to test the charging of the traction batteries while running under catenary. On the other hand, at weekends the unit is deployed on the Pleinfeld - Gunzenhausen line, where it can only charge the batteries at electrified terminals, which, according to Alstom, takes approximately 15 minutes. This different working will therefore allow for high mileage and also allow for testing different line profiles and different battery charging scenarios.

The test service is scheduled for early May 2022 and the Talent is being operated by DB Regio for this purpose. Associated partners in the project are NVBW (Nahverkehrsgesellschaft Baden-Württemberg, the Baden-Württemberg Regional Transport Company) and BEG (Bayerische Eisenbahngesellschaft). The train crews praise the Talent 3 BEMU. Passengers will notice the difference especially on the Seenlandbahn, and residents along this line will see the benefit in less noise and reduced exhaust fumes.

The fact that the battery train is currently not economically advantageous, as the cost of traction energy has recently risen significantly more than the cost of diesel, is secondary at the moment. The Free State of Bavaria therefore bears the additional costs incurred by the Seenlandbahn, the amount of which is not disclosed for reasons of „commercial confidentiality“. However, industry and universities predict that battery technology will soon become cheaper and thus not only the CO2 balance will be positive (assuming, of course, that the electricity for charging is generated from renewable sources).

Müslüm Yakisan, President of Alstom DACH, explains: „The test passenger service of the Talent 8442 100 will provide us with important data from real operation and also show that our BEMUs offer a cost-effective solution as a replacement for diesel trains on short lines or on lines with non-electrified sections. In contrast, our hydrogen trains are designed for longer routes. A total of 450 services on the German rail network are still operated exclusively by diesel trains."

1) If CAF bought the Coradia Polyvalent and Talent 3 families from Alstom in November 2021, how is it possible that you are now putting the Talent 3 BEMU from BT's original portfolio into service? This prototype 8442 100 was not included in the contract and remained in Hennigsdorf?
Alstom responded: „The BEMU demonstrator will be handed over to the buyer after approval, completion of the test run and evaluation of the results. This will take place after the completion of the financing project, which, including the ongoing passenger operation, will last until mid-2022."

2) How could Alstom enter into an agreement with DB for 8442 100 when the Talent 3 family is now owned by CAF?
„This demonstration vehicle is used to test battery technology in normal passenger operations. The insights gained will be used, among other things, in the Coradia Continental BEMUs that Alstom will supply for the regional service on the Leipzig - Chemnitz line, which are scheduled to enter service in 2023.“

3) Which family is Alstom currently using for BEMUs, since both the Coradia Polyvalent and Talent 3 families were sold to CAF in November 2021?
„For the German market it is the Coradia Continental (see answer to question 2). Another example is X'trapolis: here a contract has recently been signed with the Irish company DART (Dublin Area Rapid Transit), which, in addition to the supply of EMU, also includes 13 BEMUs.“

1) In November 2021, you acquired the Coradia Polyvalent and Talent 3 families from Alstom. How is it that Alstom is now commissioning 8442 100 from BT's portfolio? This prototype was not included in the CAF contract and remained in Hennigsdorf?
CAF answered us: „At the moment we cannot provide many details of the agreement reached with Alstom, which is not closed yet.  However, we will try to answer your questions. CAF has acquired the Talent 3 family, but the current contracts associated with this platform are not included in the transfer transaction.“

2) What about the possible Class 8442 batch  production? Are you already negotiating this with Deutsche Bahn (instead of Alstom/BT)?
„At the moment, it is not something that has been discussed.“

3) Which family will you use for BEMUs, now that you also have the Coradia Polyvalent and Talent 3 families in your portfolio, which have joined your existing Civity family? Do you foresee specific offerings for different geographic areas such as Talent 3s for German-speaking countries and Coradia Polyvalents for French-speaking countries?
„We are working on it, but these decisions require a detailed analysis of possible options and design solutions. Decisions will be made once the platforms are actually transferred.“