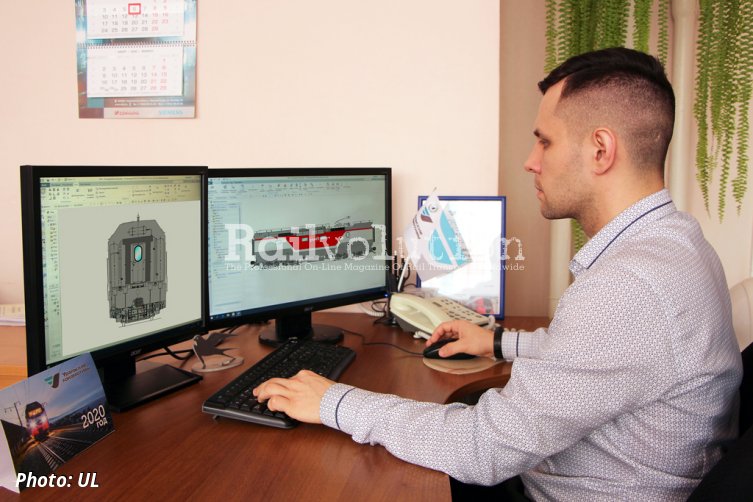 Among other recent innovations, like the first Granit with the new driver’s cabs and the first three-section Sinara, UL is at present preparing also a new, more powerful electric locomotive - Class 2ES6A. This, unlike the Class 2ES6, will have asynchronous traction equipment and is based on the new RZD requirements.

One of them is the increase of the train load from 6,300 t to 7,100 t on the slopes of up to10,5 ‰. The second RZD requirement is to harmonise the life cycle of the main components with that of the new Class 2ES6A locomotives, as RZD has changed to the LCC scheme in recent years when buying new vehicles. This requested the locomotive construction optimisation during its design stage. Essentially, at the Class 2ES6A locomotive with the 28-year life cycle, the main overhauls are planned after 14 years, so all major components will be designed with a lifespan of either 28 or 14 years so that they can only be changed during heavy overhauls, and not during repairs of lower levels.

Despite a similar class designation, the 2ES6A locomotives will have a different construction than the Class 2ES6 Sinaras, which is due to another RZD requirement that the three-section locomotive has to have a maximum length of 48 m (i. e. 3 x 16 m). For example, the Granit locomotive with a booster now has a length of 51 m (i. e. 3 x 17 m). This is a remarkable requirement in a country where freight trains are many hundreds meters long, or more (and where the four-section Class 4ES5K Yermaks are over 70 m long). But RZD cites the lengths of stabling tracks in depots and stations as a reason.

This means that a power of a two-section Granit is not enough to haul trains with a weight of 7,100 t on sloped sections of up to 10.5 ‰, but in the three-section version it is much powerful for 7,100 t, which requires RZD (and is unnecessarily long).

UL is already developing its own asynchronous traction equipment for the Class 2ES6A locomotive, which is to be ready for testing on a test bench in 2021, and the prototype 2ES6A-0001 equipped with it should start testing in 2022. To this end, on 6 February 2020 Tyagovye komponenty (Traction components) and Russkie elektricheskie dvigateli (Russian electric motors, RED) signed an agreement on the development of new asynchronous traction motors and their deliveries between 2019 and 2028.

Tagovye komponenty is based in Yekaterinburg and belongs to the Sinara group, as Sinara - Transportnye mashiny (STM, which was established on 13 August 2007) holds a 51 % stake in it. RED was created by Transneft, Moskva (a 51 % stake), and KONAR, Chelyabinsk (a 49 % stake), with the participation of a technology partner - the Italian company Nidec ASI, with the aim of locating the production of electric motors in Russia.

The February 2020 contract was concluded following a previous agreement signed between Sinara and Transneft of 1 July 2019 on cooperation in the development and production of new asynchronous traction motors with an output of up to 1,400 kW in Russia. In addition to rail transport, new motors are also intended for other sectors of the economy - oil and gas, metallurgy, the mining industry and energy.

The Type ATD1000 (Asynchronny tyagovy dvigatel, a 1,000 kW power) traction motors will be completely manufactured at RED, including testing. It is planned that the first Type ATD1000 motors for Class 2ES6A propulsion testing will be produced this year and that deliveries for batch locomotives will start in 2022. Until now, commutator motors for the Class 2ES6 locomotives are being supplied by Tatelektromash of Naberezhnye Chelny, Republic of Tatarstan (approximately 250 km east of Kazan), and the Class 2ES10 asynchronous motors are produced by Siemens Mobility.