New Locomotives From STM And UL For RZD 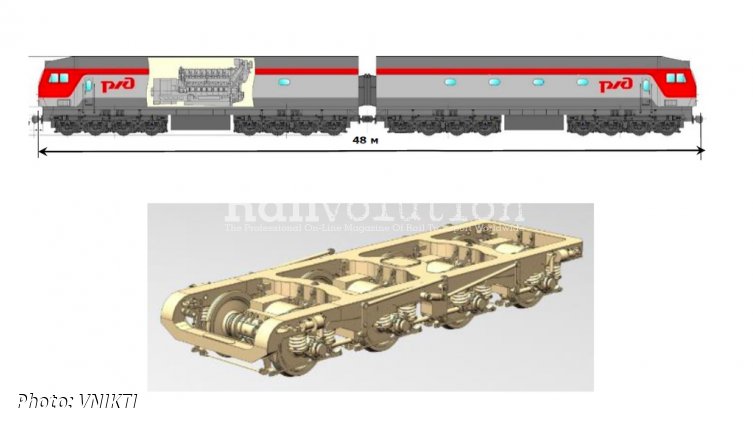 On 18 November 2020, Sinara - Transportnye mashiny (STM) and RZD signed an agreement on cooperation in the development, production, supply, testing and maintenance of the new Class 2ES6A electric locomotives and Class 2TE35A diesel locomotives, both for the main line service and with asynchronous traction equipment.

The future Class 2TE35As are to be the 16-axle locomotives, to be able to haul trains weighing of up to 9,000 tonnes. They are to be fitted with two 3,650 kW Type DM-185 engines, to be produced by UDMZ (Uralsky dizel-motorny zavod) of Yekaterinburg. Their traction equipment will be manufactured by Tyagovye komponenty (Traction components) of Yekaterinburg, both companies belonging to the STM.

The traction motors are to be of the Type ATD1000 (a 1,000 kW output), i. e. the same as in the Class 2ES6A locomotives, and will be manufactured by Russkie elektricheskie dvigateli (Russian electric motors), Chelyabinsk.

The Class 2TE35A will be structurally based on the previously prepared Class 2TE35 with the commutator traction motors („A“ stands for asynchronous traction equipment). As the accompanying picture shows, the design was created using a mechanical part of the LTZ-built gas turbine locomotive GT1h-002.

The first plans for the production of the Class 2TE35 were presented by Sinara already in mid-2015, when it was intended to produce a prototype at LTZ (Ludinovsky teplovozostroitelny zavod, Lyudinovo diesel locomotive works) in 2016 and to start its certification, and subsequently to start batch production in 2017.

In the end, the first variant was preferred, as the three-axle bogies have a worse effect on the railway superstructure than four-axle bogies, consisting of pairs of linked two-axle bogies. In both cases, a train weight of up to 7,100 t was considered.

For LTZ, which previously specialised in the production of diesel shunters, it was to be another type of main line locomotives along the Class TG16M designed for Sakhalin. This project of locomotives, which were designed to operate both on the 1,067 and 1,520 mm lines during the change of track gauge on the island, has its roots in 2011, when a 40-strong batch was ordered, with a delivery scheduled between 2012 and 2015.  Then in 2014 the first two prototypes were built and started testing, however as a result of various technical problems only six machines were produced, the final one, TG16M-006, in 2016, after which the contract was terminated by RZD.

The third type of main line locomotives from LTZ/STM was to become a Class GT1h gas turbine locomotive (again with commutation traction motors), but even this project did not exceed the prototype phase. So now STM is focusing on the new Class 2TE35A. One of the main issues currently being addressed is whether these locomotives will be built at LTZ or UL. If the choice will be for Uralskie lokomotivy, these would be the first diesel-powered rail vehicles from this facility in Verkhnyaya Pyshma.

In accordance with the agreement of 18 October 2020 and based on the RZD’s technical requirements, STM will prepare a technical and economic evaluation of these new locomotives, submit an estimate of life cycle costs and the prices STM will also ensure all phases of development and production of prototypes as well as the construction of facilities for the maintenance of locomotives.

It is planned that the contract for the supply of the 2TE35A prototype will be concluded in the first quarter of 2021. The specific numbers and delivery dates of the batch will be determined by separate agreements based on verification of declared technical and economic indicators and approval of prototypes.