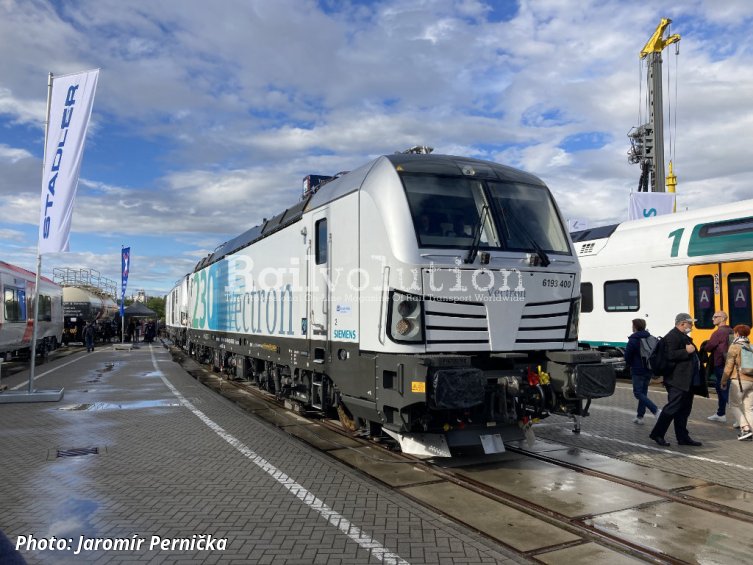 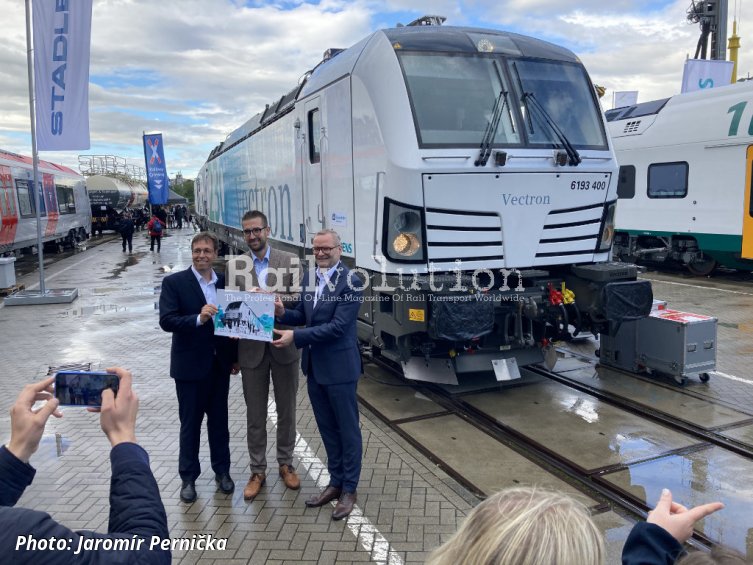 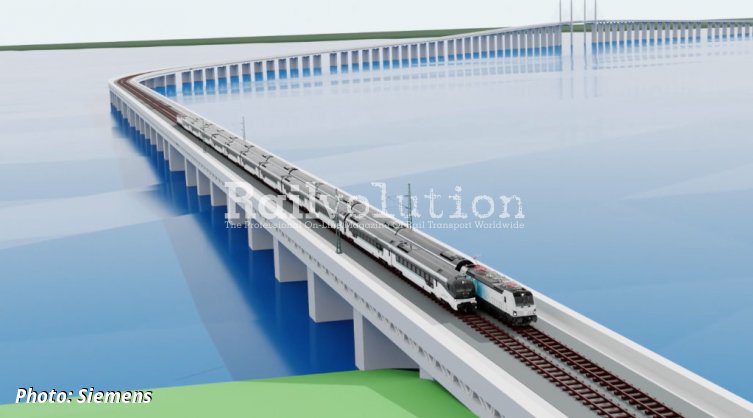 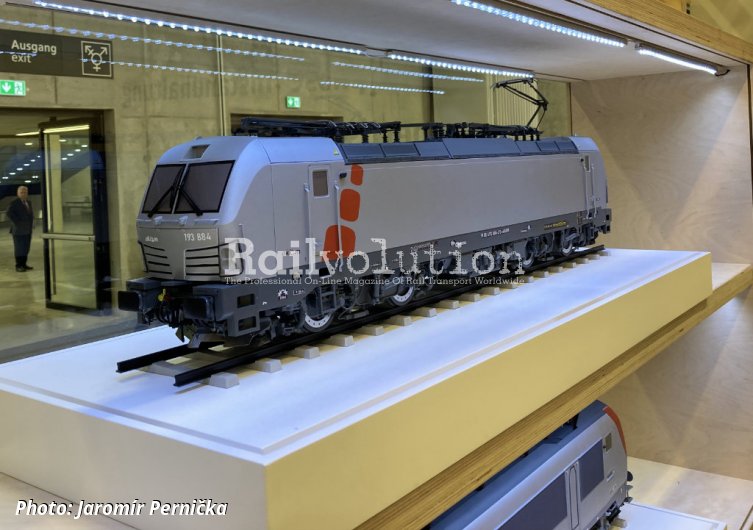 After four years of enforced hiatus, the InnoTrans is taking place again. On 20 September, Siemens and České dráhy presented the Vectron MS locomotive with a maximum speed of 230 km/h. ČD was the first customer to order this version, signing a contract for 50 machines and their full service by the manufacturer for 15 years on 31 March 2022.

The new Class 6193 instead of 193 responds to the fact that over a thousand Vectrons have already been sold. The number of locomotives registered in Germany as Class (6)193 is still far from 999, which will exhaust the available range of inventory numbers for a single series, but it can be expected that this will happen soon.

And it probably will not take too long if the order for Akiem this August exceeded the 1,500 Vectrons sold mark, and e.g. an order for another 15 locomotives for Alpha Trains was announced at the end of September, in a situation when the homologation of the TRAXX 3 is in a considerable delay. In addition, there is also the Class 192 for Smartrons, i. e. a standardised and simplified version of the Vectrons for 15/25 kV voltage only.

The Class 6193 is not a new type, but just a shortened form (either six or seven digits) of the European 12-digit EVN designation, in which Vectrons of German registration always have the digit „6“ before the 193. This is therefore only a „cosmetic“ change, with the designation 6193 being placed on the front of the vehicle. The meaning of the digit in the „6“ position is left up to the individual countries to determine for powered vehicles, so any other digit can be used, giving a very wide scope for creating derivative „classes“.

In the case of 6193 400, it is not yet a vehilce intended for ČD (although it was fitted with temporary stickers with the ČD logo for promotional reasons), but a Siemens test locomotive. Deliveries of the batch for ČD are due to start in 2025, by which time homologation of this new type should be achieved. Vectron 230 locomotives for ČD have already been assigned the new Czech Class 384. The first 20 ones will be destined for the operation of the nine-car ComfortJet NMUs, ordered by ČD on 12 April 2021, but these are due to start running already in 2024.

The remaining thirty Vectrons are to be delivered at a rate of about four per month from the beginning of 2026, so that ČD should have them all available in the same year. ČD is counting on them anyway for the hauling of trains with a maximum speed of 200 km/h (at least in the first phase), as these option machines were ordered this year instead of (part of) the locomotives from the ČD tender for the supply of up to 90 multiple-voltage machines for 200 km/h, announced in July 2020, and due to the already quite large number of Vectrons 230 ordered at once, this faster version does not end up being more expensive than that for 200 km/h.

6193 400 is a new-built locomotive and is the third Vectron for 230 km/h tests after 193 780 and 483. While these two were adapted for 230 km/h by rebuilding from the original 200 km/h versions, the 6193 400 is equipped for 230 km/h from the factory. It retains the usual axle-mounted gearboxes and traction motors with hollow pinions (originally designed for speeds up to 200 km/h), but with a different gear ratio.

From the outside, the most visible 230 km/h features are the coverings of the area around the buffers and the modifications to the ploughs. These chnages are intended to reduce the flow of air going sideways (affecting people on the platforms) and direct it under or over the locomotive. Modifications for higher speeds also include the use of higher quality steel axles and different brake linings, modification of pantographs, control software and the OBU ETCS Level 2 Baseline 3.

The latter is from Siemens - the Type Trainguard 200 OBU, while until now the Vectron  MS locomotives for Central and Eastern Europe are equipped with ETCS from Alstom (of the original Alstom, not that from the acquired Bombardier Transportation). In addition, Class B ATPs of the LZB, PZB , MIREL VZ1 and SHP types are installed.

In the case of the Vectrons 230, this is a quadruple-voltage locomotive for 1.5 kV and 3 kV DC, 15 kV 16.7 Hz and 25 kV 50 Hz. It should be specified here that although the locomotive has a universal preparation for the 1.5 kV DC supply voltage, the other equipment necessary for the latter voltage is not installed, as it is not needed for the countries required for the ČD version.

The second announced customer for the Vectron 230 version was Akiem, which ordered it in August this year in a not exactly defined number of "more than half of the 65 locomotives". So it will be interesting to see which operators will lease this fastest version and where they will use it and with which rakes (one can imagine e. g. FlixTrain in Sweden or Germany). Also on display at the Akiem stand was a model of  a Vectron in the corporate livery of the company, which only added this family to its portfolio last year, with its first order for 20 Vectron MS machines.

In conjunction with the Vectron 230 locomotive, Siemens also presented for the first time at InnoTrans the new concept of Vectrain, which is a train consisting of a Vectron, VectrainReady passenger cars and the optional use of a driving trailer to create push-pull trainsets.

As the manufacturer states: „The need for fast cross-border connections and highest flexibility in the deployment of rolling stock is becoming more imminent. The intelligent response is provided by Siemens Mobility - in the form of Vectrain as a modern alternative to short flights.

Components and software of the Vectain are available for all coach builders. Passenger coaches built by thrid parties, that can be operated with Vectron and consequently form a Vectrain, can be labeled VectrainReady after Siemens' certification. To obtain the label, coaches have to use Siemens' open Loco-Coach interface (WTB-ÖBB, ÖBB Door Control or TB0 and other established standards). A VectrainReady driving trailer uses the Vectrain Cab (HW and SW incl. front end, driver's desk, and ATP systems).“